The Radcliffe Show in the 1950s

Thousands of visitors would pour into the village of Radcliffe onTrent for the annual village fete and gala during the 1950s.

Special trains were laid on from Nottingham, the show was so popular. Traditionally held on August Bank Holiday Monday celebrities from the period would open the show and also judge various categories. Vegetables, flowers, cakes and scones, jams and jellies all were on offer with cups and certificates being awarded.

Attractions such as Punch and Judy, skittling for a live pig, childrens sports, veteran’s races for the over 40s, miniature railway, horse and pony rides and balloon races were all available.

You could also find beauty competitions such as shapely ankles or outdoor girl where girls were judged on their beauty, physique and appearance. Unfortunately there is no record of a local girl winning these competitions.

Refreshments on sale included a variety of sandwiches (actually only cheese and salmon spread!), fruit cake and of course lots of cups of tea. At the end of the show produce would be sold off.

The show was held on the extensive grounds behind the British Legion stretching upto the bypass. Mr Elwin from Hartwell House (now demolished) also lent his fields to ensure there was space for everyone.

5000 people were recorded as attending the 1950 show but the village excelled itself in 1952 when a record number of visitors came, 10,000. A fancy dress parade together with decorated vehicles would proceed through the village lead by a local silver band and the show would then be declared open by the celebrity of the day.

People such as Derrick De Marney, Guy Middleton, Major Draper (also known as the Mad Major due to his daring flying exploits) and the Duke of Devonshire. In the evening dancing would be held on the lawn in the front of the British Legion Hall. 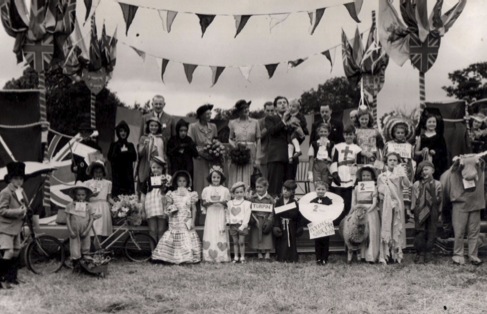